Like Shrek, Terminator is another show in which you’ll be packed into a standing room only for a while before actually heading into the theater. Terminator 2: 3-D, based on the Terminator movies, is a show that provides just about everything you can get: real actors, real action, movie screen and 3D. Grab your 3-D glasses and head into the theater, relax in air-conditioning, and enjoy the action!

Parent Worry Note: This show is based on the Terminator movies, which are for teens and adults. It’s dark and has a lot of fighting scenes. The action can get loud and young children will probably be frightened. Because the attraction gets crowded, if you’re late entering the theater you might not sit together as a family.

Final Note: Crowded, crowded! From the standing room, to the theater itself, we felt packed together. As for the show itself, we found it rather outdated and boring. If you’re not seated closer to the stage, you’ll miss out. Don’t care for shows? Then you’re better off heading to a ride like Transformers, which will give you action and adventure in a much more thrilling way. If the line isn’t long, you’ve got plenty of time, or just want to sit for a few minutes…head on inside to Terminator 2. But this show is definitely not our favorite, and in our opinion, if you miss it, you won’t miss much. 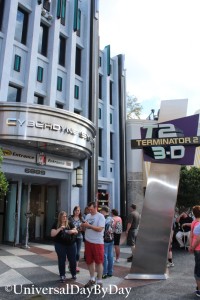 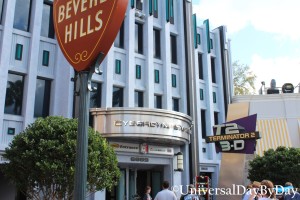